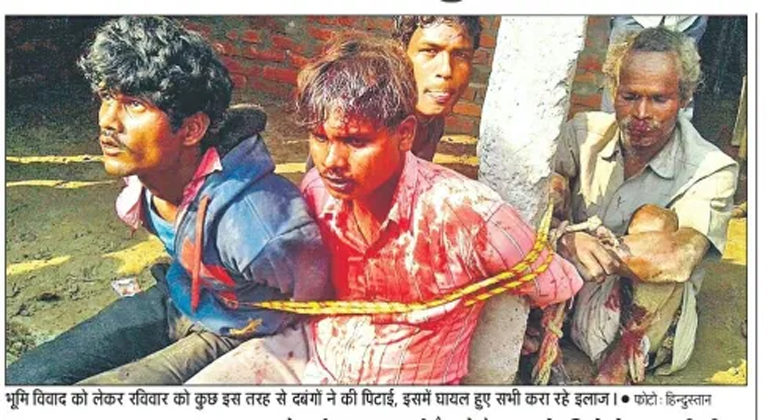 On First January, 2017, as the world rejoiced at the coming of the new year, two social-political activists in Araria district (Bihar) were killed by local landlords and their paid mercenaries as they were mobilising Dalits for their land rights. The two activists Kamleshwari Rishidev and Satnarayan Yadav, were affiliated to the CPI(ML). Houses of dalits were looted and the women were beaten and sexually assaulted. A three member fact finding team of the Jan Jagaran Shakti Sangathan (JJSS*) visited Rahariya, the village where the killings took place. The reports of the fact finding can be seen at twocircles.net, sabrangindia and youth ki awaaz.

It was shocking to hear that not only could the local police not prevent the murder of the two activists, they were also silent witnesses to four Dalits being tied to a pole and mercilessly beaten at the “bathan” (farm house) of the landlord in full public view. Dalits who were assaulted told the fact team team that the landlords stopped the police from acting by openly reminding them of the bribes they had been paid for their inaction. It was only later when Police from the adjoining police station came that they rescued those tied to the pole, or else the death toll could have been higher on that fateful day.

Other than this, the JJSS members and ordinary people of Araria district face constant harassment by the Police, who hardly have any accountability towards the public. There are many cases of bribes being openly demanded to register cases, false cases are being registered against activists as deterrents to their work, no receipts are being given for applications filed at the police station, indecent behavior towards the complainant is rampant and so on. The range of treatment ordinarily expected by people from the police here is anything ranging from indifference to intimidation, a reason why people would rather resort to local panchayats than approach a system set up by the State specifically for ensuring public safety, security and peace. There are countless cases of women survivors, complainants and accused at police stations, having to deal with sexist stereotyping, character assassination, victim blaming – all amounting to sexual harrassment, stigma and added trauma for those already suffering. Other marginalised communities also continue living in inhibition and fear of the force. In the process, the one or two honest sincere, responsive members within the police also get their reputation maligned. All across the country just now, people are protesting draconian laws – whether it be AFSPA in Kashmir and parts of the North East or the Special Public Security Acts of Chattisgarh or Maharashtra because they all give State institutions like the police and army unchecked powers over the lives of ordinary citizens – powers that they are increasingly bent on abusing. Given this grim situation we have decided it is high time we responded to this slacking attitude of the police machinery and held them accountable to their duties and responsibilities. To this end we look forward to organizing a public hearing, along with the National Alliance of People’s Movements (NAPM) in Araria, Bihar on 28thFebruary, 2017 (Tuesday).

Given your active interest in the field of social change, and focus on transparency and accountability in governance, we would like to invite you for this programme. We hope to start at 11 am and spend two to three hours on the public hearing, hearing those who have faced corruption and lack of accountability in the Police administration and also the opinion of the expert panelists. We would be inviting the police and civil administration, for this hearing. This public hearing would be followed by a massive rally in the town, to protest the Rahariya killings and establish the need for the Police Administration to be more accountable to ordinary citizens.

We sincerely hope you will be able to join us on the 28th of February, 2017 in this programme. We eagerly await your confirmation.