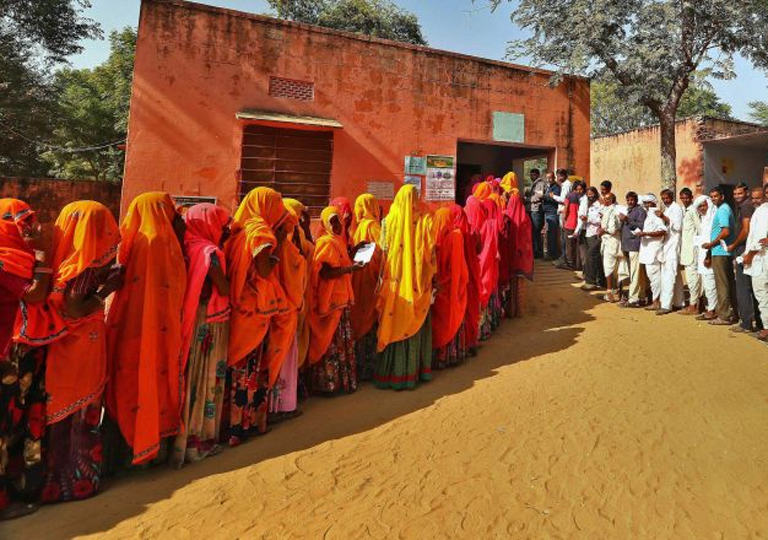 By Ashish Ranjan and Kalyani B

(The End by Soibam Haripriya)

Sitting in Sudha Devi’s courtyard, one is immediately reminded of Haripriya’s poem, The End. Sudha is a resident of Bajraha village in Raniganj Block of Araria, which is one of the most backward districts in Bihar. Located on Indo-Nepal border, parts of Araria is witness to Kosi’s wrath each year. During monsoon season, one has to wade through knee-deep water to reach villages such as Bajraha. Sudha narrates, “During bhaado (monsoon) it becomes extremely difficult to move around and perform daily household chores as there is water everywhere. Every year after the flood water subsides, we reconstruct our kuchha houses made of mud and bamboo. Bamboo has also become very expensive now.” While Sudha was ‘whining’ about the situation prevalent in her part of India, two young men sitting nearby were watching a video on their phone showing images of ‘India shining’ – a super-fast, air-conditioned train which would cover the distance between Ahmedabad and Mumbai in just 2 hours.

Sudha’s narration is not just hers but that of hundreds of Sudha belonging to rural, Dalit working-class households in Araria. Conditions in which Dalit communities live, is pitiable. A large proportion of Dalit population is landless. Those who have struggled against oppressive forces such as local zamindars, corrupt government officials to get the 3 decimel homestead land in their name as per a land redistribution scheme of the Government of Bihar, have unfortunately been allocated areas such as Bajraha where each year flood waters create havoc, making everyday life and livelihood, miserable for the poor. Along with landlessness, Dalit working-class families grapple with rampant unemployment. There are very few employment opportunities in the area which would fetch them living wages because of which a large section of working-class men migrates to places such as Delhi, Punjab, Bangalore, Chennai, to name a few. Women work in farms and barely earn 150-200 rupees per day during sowing and reaping seasons. The public education system in these villages is in shambles. Private coaching centres can be found in every nook and corner of Araria. Those who can afford private coaching, send their children to these centres. Likewise, private clinics have mushroomed everywhere given the wretched state of the public health system. Poor families spend large sums of money to seek care and treatment.

This abysmal state of affairs in the peripheral areas such as Araria is not going to change any time soon, no matter which political party wins election.  Issues such as – low wages, diminishing employment opportunities in rural areas, denial of land rights to Dalits, collapsing public systems – whether it is health system, education system or public distribution system – cannot be fundamentally addressed as long as neo-liberal forces coupled with feudal relations continue to dominate and govern people’s lives. When a vast majority of the Dalit-Bahujan working-class population in Araria is uneducated, the false promise of 2 crore jobs per year, means nothing to them.  A young Rishidev boy – musahar by caste and one of the most marginalised sections even amongst the Dalits- of Farhi village in Narpatganj Block said that only ‘educated’ people will get jobs and this promise was not applicable to him. Similarly, the 6000 rupees that the Modi government has promised farmers, holds no meaning for numerous landless workers in these areas.

Absence of counter-hegemonic narratives at grassroots might prevent people from immediately seeing the linkages between global push for privatization of education along with systemic disdain for marginalized communities, and appalling learning levels of Dalit students in government run schools but people know very well that the status quo is not going to change no matter which neta or political party wins the election. They will not get any respite from misery. Kallu Rishi of Koshkapur, another village in Raniganj Block narrates, “Just before elections, all netas will come and touch our feet, promising to give us land, a Pradhan Mantri Awas house, pensions, etc. but as soon as the casting of vote is over, they will not return. Their car wheels slip on our dirt roads.”

Despite being aware of the hollowness of the grand speeches delivered by political leaders, people will cast their vote. They will cast their vote on the basis of several push and pull factors such as “what the tola (part of a village with usually a homogeneous caste composition) decides”, “which candidate has a better chance of winning”, “what one hears at chowk-chaurahas”, “what the elders or the important people will say”, “who had won elections last time”, etc. Interestingly, spaces such as satsang and jeevika meetings, which are frequented by the working-class women, are also being used for election campaigning. These spaces have emerged as sites which is used by the ruling class to perpetuate its ideas or in Gramscian term, ‘manufacture consent’.

Caste affinity interspersed with local power dynamics based on feudal relations continue to play an important role in the selection process of a candidate or a party to be voted for. A landless Rishidev who faces exploitation at the hands of a local zamindar belonging to Yadav caste, is not inclined to vote for Rashtriya Janta Dal (RJD) which is seen as a party of Yadavs. Weakening of Yadavs’ political power would mean less trouble for Rishidevs in their struggle for homestead land or in a land dispute leading to police intervention.  In everyday life, a landless peasant are exploitated by local zamindars whether regarding ownership of land, passage to their tola, forced labour, or other such forms of exploitation. The face of the immediate oppressor is etched in their memory. But with Jiten Ram Manjhi (ex-chief minister of Bihar who also comes from the musahar community) joining the MahaGathbandhan, Rishidevs who had earlier voted for Nitish Kumar because of the ‘Mahadalit’ card and also to oppose Yadavs, are also seen inclining towards Mahagathbandhan. This might lead to a split in Rishidev’s votes between Mahagathbandhan and NDA.  However, in a Paswan tola, one can see a clear inclination towards Ram Vilas Paswan and NDA.

The larger communal discourse and ‘othering’ of Muslims that has happened in the country since the demolition of Babri Mosque, will also guide the election result in Araria. Araria falls in the Seemanchal region of Bihar which has a substantial Muslim population. Four parliamentary constituencies in Seemanchal, namely Purnea, Katihar, Kishanganj and Araria, have around 40 % or more Muslim population. The communal narrative has also made in-roads into Seemanchal. Sanskritisation amongst Dalit communities in the area has led to beliefs such as consumption of animal meat is sinful, which has further distanced these communities from Muslims. Politics of RSS-BJP has painted Muslims as Pakistanis and have put a question mark in the minds of Hindus about their loyalty to the country. Given such a context, with a strong Muslim candidate in fray in the district, polarisation is easy to do and has been one of the dominant features of the election in Araria. Polarisation of votes based on religion coupled with split in Muslim votes because of the caste rivalry between ‘Kulhaiyas’ (Kulhaiyas belong to OBC category and are high in numbers only in this region) and other castes, has resulted into the victory of BJP candidates like Pradeep Singh, in the past. However, Modi’s overtly anti-Muslim politics have helped consolidate Muslim votes in favour of candidates that can defeat BJP and its allies. Sarfaraj Alam, the sitting MP and son of late strongmen of the area Md. Taslimuddin, knows that his best chance is in consolidation of Muslim and Yadav votes in his favour. However, with Lalu Prasad Yadav missing in action, this election year, along with heightened communal sentiments playing their role and BJP hoping to cash in Pulwama, Yadav vote is something that cannot be taken for granted. In 2018 by-elections, Sarfaraz Alam had won by 61,988 votes but this one is too close to call.

Millions will be spent on election campaign before the casting of vote in Araria on the 23rd April. By the end of May there will be a victor and a vanquished but democracy would have failed Sudha Devi who will again wade through knee-deep water during the early showers of Monsoon in June.